On December 8th a certain book choice award was announced and we were thoroughly unimpressed. We decided it’s time for a NEW book choice award that celebrates the books that have found a place on our diversified bookshelves.

We took nominations from our community of readers and opened up voting to the public. We received over 350 votes and now it’s time to announce the Feminist Book Club Choice Awards winners of 2022.

“Tomorrow, and Tomorrow, and Tomorrow traces 30 years of friendship between Sadie Green and Sam Masur as they grow from young game lovers to seasoned video game creators. It is a novel that manages to be as smart as it is sentimental, while also offering an insightful and fun glimpse into the world of game creation.”

Harlem Sunset by Nekesa Afia is part of her Harlem Renaissance Mystery series. Taking place in 1927 Harlem, Louis Lloyd just found the perfect job as the manager of the hot new speakeasy, The Dove. Unfortunately she finds herself caught up in a Murder that hits a little too close to home. Ashley reviewed Harlem Sunset in 2022!

“Reading a mystery with these characters is captivating. The breath of varied characters compliments the drama, action, and mystery that meets the page. The dialogue is poetic as much as it is gripping.”

In second place we have Jackal by Erin E. Adams and in third is Counterfeit by Kirstin Chen

In second place is The Hacienda by Isabel Cañas and in third, The Daughter of Doctor Moreau by Silvia Moreno-Garcia

Science Fiction: The Memory Librarian and Other Stories of Dirty Computer by Janelle Monáe

The Memory Librarian and Other Stories of Dirty Computer by Janelle Monáe came in first for the Science Fiction category and was also published by Harper Collins. Have you signed the Harper Collins Union solidarity letter yet?

Coming in second place is How High We Go In The Dark  by Sequoia Nagamatsu and coming in third is Sea of Tranquility by Emily St. John Mandel

Romance:  For Butter or Worse by Erin La Rosa

If you’re a fan of the enemies-to-lovers trope,  For Butter or Worse by Erin La Rosa might be next on your TBR. This book tells the story of Chef Nina Lyon and Leo O’Donnell getting caught up in a fake relationship to save their culinary hosting careers.

Fantasy: The World We Make by N. K. Jemisin

The World We Make completes N. K. Jemisin’s Great Cities Duology. It was a highly anticipated book for the Feminist Book Club staff and The World We Make did not disappoint. The first book in the series, The City We Became, was one of Natalia’s favorite books of 2021.

Listen to Natalia’s thoughts on The City We Became here

In second place is Babel by R.F. Kuang and in third is When Women Were Dragons by Kelly Barnhill

Horror: The Hacienda by Isabel Cañas

The Hacienda by Isabel Cañas has popped up on our blog many times. It’s Mexican Gothic meets Rebecca set in the aftermath of the Mexican War of Independence. Did I mention there’s a hot priest?

Nina also did a great post highlighting The Hacienda: Read it here

Coming in second place is Jackal by Erin E. Adams and in third is House of Hunger by Alexis Henderson

Humor: Four Aunties and a Wedding by Jesse Q. Sutanto

You might remember these aunties from a 2021 Feminist Book Club book of the month, Dial A for Aunties! Jesse Q. Sutanto brought the aunties back for a hilarious sequel in this rom-com/murder mystery mashup.

Jesse Q. Sutanto has been featured on the blog twice! Check the posts out here:

Dial A For Aunties Author Interview with Yasi

Coming in second is Legends & Lattes: A Novel of High Fantasy and Low Stakes by Travis Baldree and in third is Girls Can Kiss Now by Jill Gutowitz

Non-Fiction: Rest Is Resistance: A Manifesto by Tricia Hersey

This is a personal favorite of 2022. Rest Is Resistance: A Manifesto by Tricia Hersey is a game-changing book about our relationship to work, capitalism, and the grind of everyday life.

I had the opportunity to sit down with Renee and Sally to discuss this book on the Feminist Book Club: The Podcast. Listen to it here!

In second place is It Came From the Closet: Queer Reflections on Horror edited by Joe Vallese and in third is The Trayvon Generation by Elizabeth Alexander

Memoir: Year of the Tiger: An Activist’s Life by Alice Wong

Year of the Tiger: An Activist’s Life is written by the founder and director of the Disability Visibility Project. Alice Wong offers us a glimpse into her journey as an activist in the continued fight for disability rights.

In second place we have Crying in the Bathroom by Erika L. Sánchez and in third is The Man Who Could Move Clouds by Ingrid Rojas Contreras.

We noticed in other choice awards categories the memoirs written by “non-celebrities” were over shadowed, so we decided celebrity memoir should be it’s own category. I feel like I don’t need to explain what this book is since it’s been all over booktok, bookstagram, etc. for the past few months. I’m Glad My Mom Died by Jennette McCurdy overwhelmingly took first in the celebrity memoir category.

I had a chance to sit down with Alana, Ashley, and Mariquita to talk about I’m Glad My Mom Died- Listen to it here

Coming in second place is Finding Me: A Memoir by Viola Davis and in third is Making a Scene by Constance Wu

Our community tends to lean towards the left…. No More Police. A Case for Abolition by Mariame Kaba & Andrea J Ritchie took first place in the History & Biography category. If you’re looking to learn more about why policing doesn’t stop violence and police abolition, this is a great place to start.

In second place is Before We Were Trans: A New History of Gender by Kit Heyam and in third is Butts: A Backstory by Heather Radke.

Samira Ahmed brings a new adventure for Ms. Marvel. After an explosion of interdimensional proportions at her cousin’s lab, Kamala Khan suddenly has a doppelgänger to deal with! As Ms. Marvel, it’s her duty to help out the newcomer, but something doesn’t feel quite right.

In second place is Wash Day Diaries by Jamila Rowser and Robyn Smith and in third is Lore Olympus Volume 2 by Rachel Smythe.

Poetry: Call Us What We Carry by Amanda Gorman

Formerly titled The Hill We Climb and Other Poems, the luminous poetry collection by presidential inaugural poet Amanda Gorman explores history, language, identity, and erasure through out Call Us What We Carry.

I told you we loved The Hacienda by Isabel Cañas. It just make sense that it was voted number 1 for the most love debut novel of 2022!

Feminist Book Club Favorite Read of 2022: We Do This ‘Til We Free Us by Mariame Kaba

Mariame Kaba joined us for a Q & A back in July. Check out the recap Alana did here.

Thank you to those who nominated and voted in the Feminist Book Club Choice Awards! Let’s hope to continue to diversify our bookshelves throughout 2023! 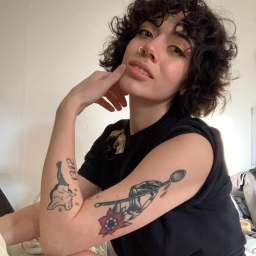