Cautiously Optimistic and a Little Homesick: My Baking by Feel Test Drive

Want to know two of my favorite things? Baking and honoring my emotions. So when presented with the chance to test drive something from Becca Rea-Tucker’s Baking by Feel, I was all in.

I browsed through the table of contents, making note of the (many, many) emotions resonating in that moment. They were all over the place, as was my general state of mind. In my heart, I wanted to go with “optimistic,” but it seemed like such a leap from where I was that I initially landed on “scattered.” I wanted the best for my future self, but I also didn’t want to set her up for a massive letdown.

When it finally came time to bake, things had shifted for me. For starters, I was beginning to feel the heavy weight of anxiety and depression lift for the first time in a couple of years. Not enough that I felt “normal,” but enough to consider what life would look like if I had more energy… if I started doing the things I love again. I was also a couple of weeks into dating somebody I was starting to like. A lot. Nobody was more surprised about this than I was. Dating has never really been a priority for me, and it’s hard for me to connect with somebody enough to actively want to spend time with them. (That sounds strange, maybe, but my recent realization that I’m probably aromantic is a story for another day.)

Serendipitously, I received some delightful news on the morning I was set to bake, and ultimately, that’s what prompted me to make the switch from the blackberry lime galette to the cardamom caramel poke cake.

I have to admit that my optimism was tested at every step of this process. I haven’t baked a cake in years, and I was skeptical that cardamom was even a flavor I would want in a cake.

I began to question and second-guess every instruction. Just how much parchment paper should I use? How, exactly, should I position it? When the recipe mentioned using a stand mixer, I had my usual panic about how I’d make do with a handheld mixer instead. Surely, only a Serious Baker was capable of making this cake. Not me, with my years-long break from baking.

Then it came time to make the caramel.

Now, it’s been a looooong time since I made caramel, and even back then, I don’t know that I ever fully got it right. On that day, I was so nervous about burning the caramel that I did not leave it on for long enough. Instead of the rich, deep caramel color we’re supposed to look for, I ended up with a barely visible tan color. I’m also generally a “double the sauce” type of person. But I simply wasn’t feeling confident enough to alter the recipe on my first attempt. What if I messed it all up? I knew I could toss it and start over, but I was desperate to reach the moment when it all came together.

In the end, the cake came out okay. Is it the best thing I’ve ever made? No. But the next morning, when I pulled it out of the fridge, cut myself a piece, and had it with some freshly brewed coffee, I was happy with my choice. And I have to admit, I was quite proud of myself for taking on something that felt so ambitious on my first baking adventure in a long time. I actually did feel a little more optimistic about the state of the world and my own life.

Another Day, Another Emotion, Another Chance to Bake by Feel

There’s something about Becca’s vibe and approach that stuck with me long after I had the last piece of cake, and I knew it wouldn’t be long before I baked something else.

A couple of weeks later, dude-I’m-dating was coming over for dinner and, missing my best friend and my sweet nibling, I decided to make the sour cream sugar cookies for when you’re feeling homesick, along with a buffalo chicken mac and cheese I used to make for us back when I still lived in New York.

The process was slightly stressful and things did not go as planned. Don’t go searching for a rotisserie chicken in Tulsa at 5 p.m. on a Friday because you won’t find one. Most notably, though, I accidentally omitted an entire cup of flour from the cookies and only realized it when the cookie dough balls I was supposed to be rolling just… did not feel like cookie dough. I was appreciative in that moment for all my years of baking to alert me that something was wrong, and I was reminded of something Becca says in the “how to use this book” section: Part of this process is simply learning to trust ourselves. It’s about being connected to our intuition and our senses and using that to guide us.

I took a breath, set aside the judgment for not getting it right the first time, and tried to reconnect to that sense of optimism I had the first time around. I added the flour, rolled the dough, turned up the music, and actually had fun! I ended up with a batch of cookies so good I honestly can’t wait for the next time I get to make them.

I’m grateful for this book and the timing of it entering my life. Even a few weeks ago, I’m not sure I would have made it through any of the recipes after making a mistake, let alone two. I simply was not in the headspace to do it. Now, with two recipes under my belt and more people to bake for than I’ve had in years, I’m excited to reconnect with this part of myself. And the gift of tapping into my emotions to do it feels like an added bonus — a way to remind myself that I’m still here, still trying, still finding reasons to have hope.

You can find our previous Baking by Feel test drives here, here, and here. 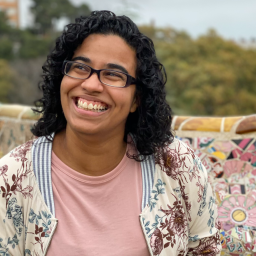 Sally Mercedes
Sally Mercedes websiteSally Mercedes TwitterSally Mercedes Instagram
Sally is a queer Dominican New Yorker currently living in Tulsa, OK. She loves Broadway, road trips, long walks, and cold brew, and she’s on a mission to reclaim all things as sacred, especially her self. You can usually find her listening to an audiobook while cooking, baking, or working on a jigsaw puzzle.